A consultancy of academics and professionals offering the best mix of sound theory and real-world experience.
I learned from the real world managing my tourism company and I learned sound theory researching and writing my thesis on political crises and tourism.
I learned how much the tourism business needs the right mix of academic knowledge and business experience to endure and flourish through the crises of global tourism today.
... read my Welcome post ...

"Blood on the Beach" - Your tourism crisis handbook 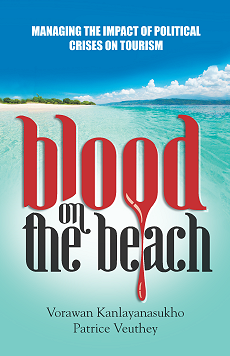 If you are in tourism, crises from external events are increasingly affecting your business. The connected world that greatly extends your market reach today also brought to your door step the effects of remote crises which only a generation ago had a lesser impact across continents between tourist destinations and originating markets.

Unlike natural disasters, such as earthquakes or tsunami, virtually all other crises have social or political roots, however remote the connection may seem to be. For example, floods are rarely a purely natural event. More often than not, the cause may be land mismanagement like deforestation, or ineffective flood control compromised by economic or political considerations.

Political crises unfolding in or near tourist destinations can have a devastating effect, far beyond the human tragedy that is often the immediate result. The repercussions of these events affect many people and organisations, from the innocent holidaymaker to local political bodies and tourism organisations. They may ruin industries, cities, even countries. So learning to manage them and their after-effects is vital. While there are several studies of tourism crises caused by terrorism and natural disasters, few in-depth studies have explored the impact on the tourism industry of political crises in general.

“Blood on the Beach” is a how-to handbook to apply crisis management to political crises and provides a framework for political crisis responses and practical solutions for the tourism industry.

The title of the book reflects the impact of political crises upon tourism as it happened after the terrorist attack on the beach of Sousse, Tunisia in 2015, because of its significance for the tourism industry at large: it was more than a destination being affected, it was the product itself - the beach – that became affected. Then the Brussels lockdown following the November 2015 terror attack in Paris transformed a destination crisis event into a product crisis now affecting all major cities. When, a few days later, the US State Department issued a worldwide travel alert, tourism stakeholders face the broadest threat to the industry since the last world war as its two key products, beaches and major cities, became affected globally by current events.

The framework of political crisis responses that is the foundation of this handbook is built from the a classification model of political crisis situations that can usually be assessed in terms of the degree of violence involved and their duration, as expressed in this figure.

The first dimension is the degree of violence, which ranges from non-violent to violent. The second dimension is the duration of the crisis, which ranges from ephemeral to enduring, where ephemeral may span from a few hours to a few days and enduring from several days to months or even years. From these two dimensions, political crises can then be divided into four main types: (1) violent enduring crises, (2) violent ephemeral crises, (3) non-violent enduring crises, and (4) nonviolent ephemeral crises.

About “Blood on the Beach”

Political acts of violence in tourist destinations, such as the attacks in Paris, Ankara and Sousse, have a disastrous and long-lasting effect on local people and businesses, to say nothing of the tourists themselves. In these days of instant communication, the effect is all the more dramatic and far reaching, as even reputedly safe destinations are under threat.
Based on a PhD research on managing the impact of political crises on tourism, this book offers a simplified and practical application of the management framework developed in the thesis. The book includes enlightening extracts from in-depth interviews with a wide range of tourism professionals and reveals a fascinating picture of the true impact of political crises and terrorism on the tourism industry and the tourists. Blood on the Beach will be of great value to all those involved in the tourism industry around the world.

Posted by Unknown at 15:12 No comments: Links to this post

Find us on LinkedIn: